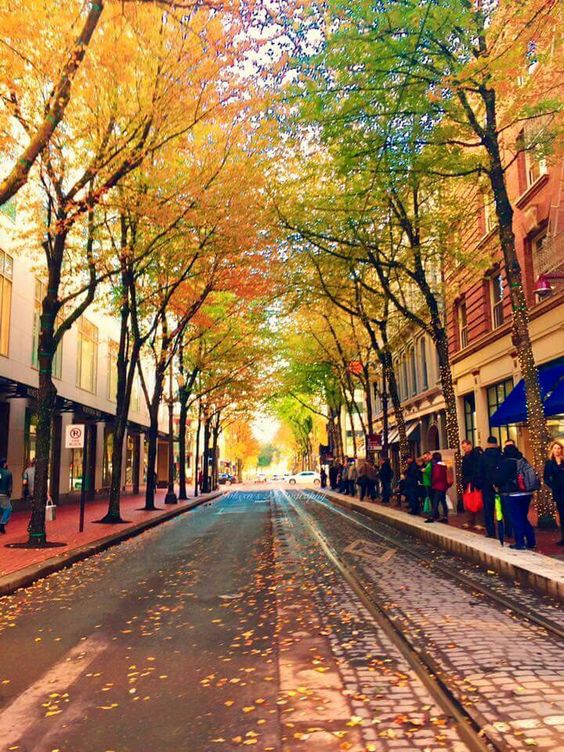 Let’s just say I was super impressed with Portland this last trip out. I’ve never really gotten in to the city and checked it out, which is unfortunate. I’ve been missing out! My brother invited me up for the weekend, so I started doing some research online. I read up on Portland’s hot spots and tourist traps (I like them both). Being from Southern California, I am a stone’s throw away from culture and entertainment. I’ve gotten kind of spoiled in that respect. Portland surprised me with a very cool culture, genuinely nice people, and vintage stores galore!

First of all, when I travel to a city that I’ve never really explored, I do a bunch of light research online. When I get to my destination, I always get advice from the locals on the latest and greatest. Usually people will touch on a few points I already have on my list and then will add some fun additions I didn’t know about. This is how I test if their advice is worth listening to!  I also recommend booking your stay using Airbnb.  Many times hosts will have some pointers on local coffee shops or restaurants that can’t be beat!  And it’s much cheaper than a hotel.  Use this link to save $40 off your next Airbnb trip!  Terrific if you would like access to a kitchen, which is a money-saver, too.

Props to Portland for keeping zines alive and kicking. I was so stoked to find a big collection when I was doing my initial research. The zines I found are illustrated and contain unique takes on the best finds in the city. Check them out! 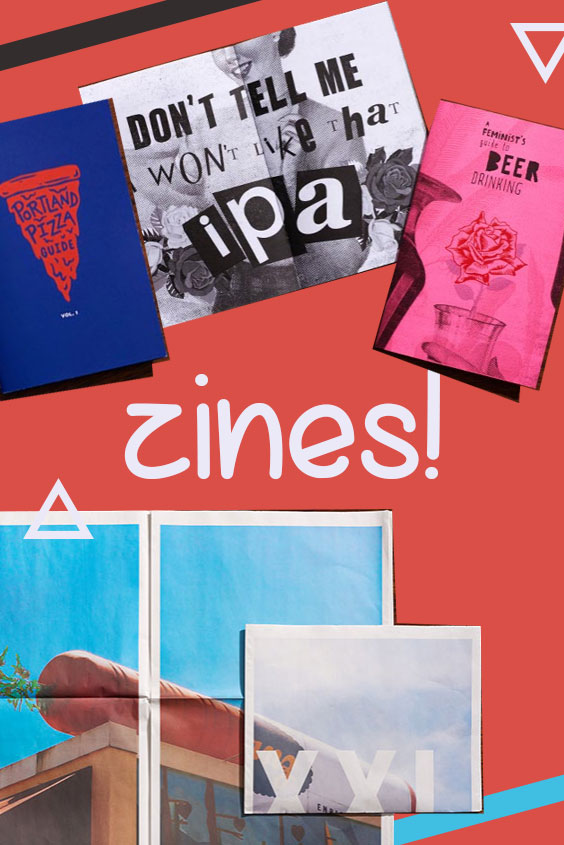 Day Trip on the Coast – Easy!

The rad thing about Portland, is that the airport is right on the Oregon/ Washington border. It’s about a 2-hr drive to the coast, which makes for a great day trip. Not to mention the drive is gorgeous. Massive pine trees lining the highway and little rivers and lakes along the way. Once you get to the coast, the pine trees don’t stop and it’s got the same beautiful qualities that I love about Big Sur.

We took my nieces and nephew up to Astoria and saw the Goonies house. There are signs all around the neighborhood that say “Access closed to Goonies house!” (posted by the poor people who have had their lawns tromped on over the years by sightseers). Of course, we considered ourselves an exception to the rule and very politely got our token photos and went on our merry way. Turns out the kids hadn’t even seen Goonies! My brother didn’t even realize! We ended up having a Goonies movie night that night; those poor kids – it was all kind of lost on them.

Bridging the gap between Oregon and Washington

After the Goonies house, we had lunch and then drove over to Cannon Beach to see Haystack Rock (spoiler alert! where the Goonies surfaced from the cave and watched the pirate ship sail away). The beaches are so beautiful and different from Southern California. I loved it. There are bridges all around the area, and we were in one state and then the other throughout the entire weekend. So, I scored a trip to Washington and Oregon with one super cheap flight! (Check out the Hopper app – it lets you set destination and time frame and sends you alerts on travel deals).

Music Alert! Here’s an oldie but goodie – I thought it was well-suited for a Portland bit 😉
Press “Listen in Browser” to play immediately.

No matter when you go, be ready for non-stop rain. I learned that Portland is considered to be a “temperate rainforest”. This means it’s super green and constantly raining. If you go just kind of prepared for it, it is quite fun for a couple of days 😉 Like a typical California girl, I under-packed with a green hooded windbreaker as my rain-repellent. A windbreaker worked pretty much perfect until the end of the second day, when it could take no more and sadly started absorbing water. Lesson learned – something in a similar weight would be perfect – just needed to be more water-proof.

Note: If you opt for a raincoat, the locals will certainly know you’re from out-of-town because they don’t wear hoods or use umbrellas or anything. They just go au natural love-me-or-leave-me style. I didn’t care, but just letting you know if you want to blend in. I kind of like sticking out like a sore thumb when I travel. Maybe it’s a safety mechanism ;p

Voodoo Donuts For Your Guilty Pleasure

The next day, we decided to explore the city (AKA walk every square block of the place until we were satisfied) and this is where my handy-dandy list came into play. We took the train in, just for fun, and then walked down to Voodoo Donuts – a touristy must-go. They’ve got a line out the door non-stop, but it moves pretty quickly.

Once you’re inside the tiny shop, you can view the menu packed with all sorts of crazy concoctions. I of course had the “Triple Chocolate Penetration” donut (much to my brother’s chagrin), which was the yummiest chocolate donut with chocolate frosting and…Cocoa Puffs on top. Sometimes it’s surprising the things we find delicious. Sometimes not.

Other donuts available are the “Gay Bar” (cream donut and rainbow Fruit Loops), the “Old Dirty Bastard” donut (with chocolate frosting, Oreos, and peanut butter), the “Bacon Maple Bar” donut (with maple frosting and bacon on top), etc. You get the idea. But no matter how crazy they sound, they are really surprisingly, amazingly good.

In another life, I may be homeless.

One of my favorite things about Portland was taking in the city itself. Right across the street from Voodoo Donuts is the infamous “Keep Portland Weird” wall. Interestingly, Portland is a city where many people are homeless by choice! They seem to have a little sub-community going that I found interesting. And strangely compelling.. Kind of nudged my inner Jack Kerouac.

Portland is also a place where you can still find book stores and record stores! Hooray! You can bet I was stoked to rummage through both. The biggest book store is Powell’s Books. Powell’s Books has two main locations – one on Hawthorne and the one we went to on W. Burnside. It’s a couple of floors and takes up a whole block. You can’t miss it. I also don’t want to alarm anyone, but there is a Dr. Martin’s store right across the street. Are you feeling what I’m getting at? This whole town was sort of 90’s heaven for people who still read and love music. People like you and me.

Further down to SW 10th (a block away), I found my favorite tiny boutique, Tender Loving Empire. Make sure you connect with them on your next trip to Portland. Pick up some local vinyl, artisanal goods, bath organics, jewelry, or in my case a souvenir. They had these fun metal coasters in the shape of Oregon with hearts cut out in the Portland section. Perfect Valentine’s Day gift for my friend from Oregon. Done and done!

If you’re needing food, another unique feature of the city are the food carts. Portland food carts basically offer a variety of authentic ethnic foods that make for a great lunch. My brother’s favorite cart is Chez Dodo, located in Square Market. It’s the only Mauritian themed cuisine in the city, which is inspired by French, African, Indian, Creole, and Chinese cuisine. My brother has tried almost every cart on the block and said you really can’t go wrong.

Please Be Sure to Hit a Local Vintage Boutique

After lunch, we Ubered down Hawthorne Street to check out a line of vintage shops to finish the day (thanks local girl for the great advice!). They were super thrift-style and I blazed through most of them until I got to Vintage Pink – a pink store housing over 20 vendors carrying mid-century furniture and décor. Super legit. We spent a lot of time perusing the different vendor setups and checking out stuff. It was like sneaking into the coolest homes for just a peek without getting caught! I still dream of that place.

Further down the street, we ended at Magpie, which had the best selection of vintage coats, dresses, and furs on the block. Their stuff is mostly from the 60s and 70s and we spent quite some time going through racks of rad apparel. I’m glad I ended on those high notes and will definitely hit that street up again earlier in the day and with a big suitcase waiting to be filled.

Finally, the pièce de résistance food cart dessert experience happened in the most hipster-y food cart section I found. Now these guys are on to something – I loved it! We went to Perierra Crêperie, which is on the corner of Hawthorne and 12th. It’s got the big yellow duck perched on top, so you can’t miss it.

There’s a couple of other food carts on the corner and they form a little plaza with a fire pit and lights strung overhead. It felt like a total date-night venue. And please, what’s not to love about a huge folded cone of crêpe, strawberry, banana, Nutella, and rum? The clientele was easy on the eyes and I think this would be an area for young marrieds or singles to check out (for future reference).

Overcoming the Roadblock of Regret: “Next Time”

As you may have noticed, I was loving that 90’s fashion peeking out everywhere in an “I actually grew up in the 90’s so I know what I’m doing” sort of way. Very nicely done. My list did initially include Chinatown, which is supposedly the nightclub hot spot, so I’ll have to do another trip up and explore that aspect. I was most interested in Holocene (who was doing a “Dance Yrself Clean” Friday night and a Sweater Beats Saturday night) and a girlfriend also recommended Whiskey Library if you’ve got 99 problems.

So any other good suggestions I would love to hear because this city hit my Top 5 list for the USA! Be a pal and leave a comment below – I’m planning on heading back soon! If you go, let me know as well – I want to hear about your trip.

Winter weather getting you down? Use our last Caribbean cruise vacation as a guide for planning your next family vacation! We will give you the highs and lows of the journey. Certain hotels were a hit, where others weren’t so... END_OF_DOCUMENT_TOKEN_TO_BE_REPLACED

Get up into the Mountain West and discover one of the frontiers that makes this country a treasure. We recently took a day trip to Yellowstone National Park and I felt like I had just visited 20 different planets by... END_OF_DOCUMENT_TOKEN_TO_BE_REPLACED

Our first stop in Vancouver, BC was the Aberdeen Centre Mall. While we were here, Zia got the opportunity to practice some of her Chinese language skills with some local shop owners. There are two sides to this mall – with... END_OF_DOCUMENT_TOKEN_TO_BE_REPLACED