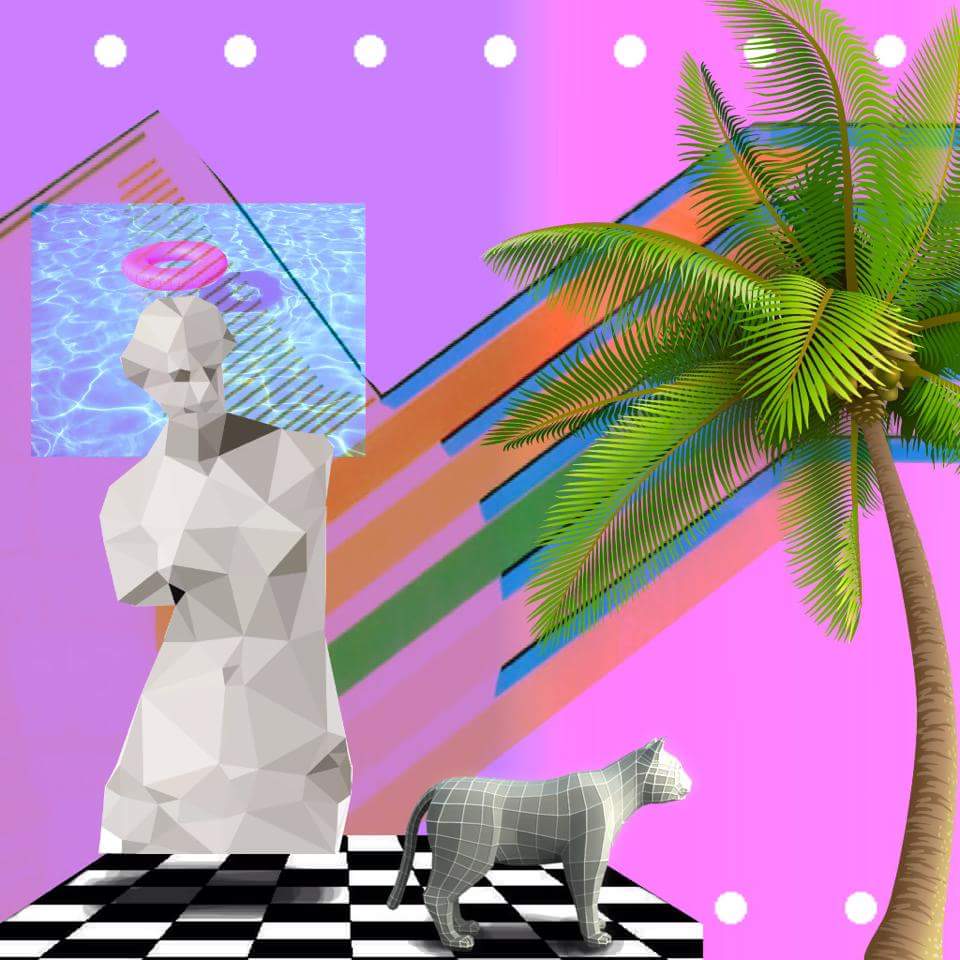 If you’ve seen the new Tumblr logo, then you’ve gotten your first dose of the Vaporwave sweep that’s starting to permeate mass media.  Vaporwave is ultimately a DIY movement created by mostly by millennial teens and is considered to be on the same parallel as punk.  Also, the MTV-inspired logo has brought awareness to a music/ art genre that has been lurking in the internet shadows since 2010.

Millennials are on the Loose!

Mostly known by millennials, the sub-genre was born on the internet. Case in point, my 16-year old first introduced it to me some time last year. He grew up appreciating electronic music and orchestral music alike. Naturally, the slowed down, melodic sounds appeal to him wholeheartedly. Pretty much the opposite of the punk a lot of us grew up with in the 80’s.

Music Alert! Here’s a Vaporwave track by American electronic musician Vektroid, released under the alias Macintosh Plus on December 9, 2011.
Press “Listen in Browser” to play immediately.

First of all, Vaporwavers take existing tracks of music, chop it up a bit, and spit it back in loops. It comes back to us slowed down and tripped out.  Interestingly, the name is derived from vaporware, which is a product that is announced but is never released.  Furthermore, there is probably some question to the legality of sampling tracks, so most artists keep their names and locations discreet.

Vaporwave music is described as “haunted” or as being a type of “franken music”.  Cell phones, ATM machines, and other noises that are part of your normal daily soundtrack are mixed in and drawn out.  Wavers are more interested in which samples are being manipulated more than how they are created.  Popular tracks contain samples from the 80’s and Japanese pop hits and 50% of the experience is visual.

Last week, I came across an article proclaiming Vaporwave to be dead.  Ultimately, Vaporwave is considered to be an exploration of anti-consumerism.   While I was researching the concept, ideology from Fight Club came to mind.  “Advertising has us chasing cars and clothes, working jobs we hate so we can buy shit we don’t need. ”  This mentality permeates through the sub-culture and their artistic endeavors.

Babbling Corpse: Vaporwave and the Commodification of Ghosts

Author Grafton Tanner (Babbling Corpse) views Vaporwave as the poster child of the decline and fall of western civilization. Check out his book if you’re interested in the changing relationship between art and commerce. He outlines how the music genre is a symptom of rebellion against the powerful commercial music establishment that dictates our tastes.

Art/ aesthetics associated with Vaporwave (aka A E S T H E T I C) is the best part. It’s definitely a flashback to MTV days when Max Headroom was around. Consequently, the more I see these computer-created collages, the happier I am! I would rather see a cut-out collage or mass sharpie use any day of the week!

If you have to ask, the answer is no.

Most of all,  A E S T H E T I C combines either glitch art, Renaissance sculptures, Japanese characters and visual components of 80’s electronic albums. It has since turned into an art form that people seem to want to create.  But they aren’t sure if they’re doing it right! Oh the irony.  I’ve even seen tutorials online.  Either way, I love the hot pink and purple concoctions that are so bad, they’re good.

Visually, the genre is taking off due to brands like Tumblr incorporating mainstream nostalgia into their marketing. Because of this, I have a feeling you’ll be seeing more of it on tees and in graphic design as we go. Brace yourselves! Global capitalism’s effect on art and music is alive and kicking.  Discover the upcoming trend’s earlier roots and think about what defines your tastes.  Let us know your thoughts in the comment box below.

3 thoughts on “Vaporwave is Dead – Sorry if You Missed it”

If you have a love for mysticism, you are probably familiar with tarot cards.  Many decks contain tarot card art that can be just as personal as the reading. Artistic styles range from classic to contemporary and the devil is... END_OF_DOCUMENT_TOKEN_TO_BE_REPLACED

If you’re looking for music that will speak to your soul, jazz is the right choice 365 days a year. Our favorite female jazz singers include legends from the 30s and 40s up to today’s French jazz-pop darlings. Start adding... END_OF_DOCUMENT_TOKEN_TO_BE_REPLACED

Staying in much? Add one of our favorite Netflix cooking shows to your queue and add a little culture to your life. A good cooking show introduces you to new foods, interesting cultures, and fabulous cinematography. Perfect any night or... END_OF_DOCUMENT_TOKEN_TO_BE_REPLACED