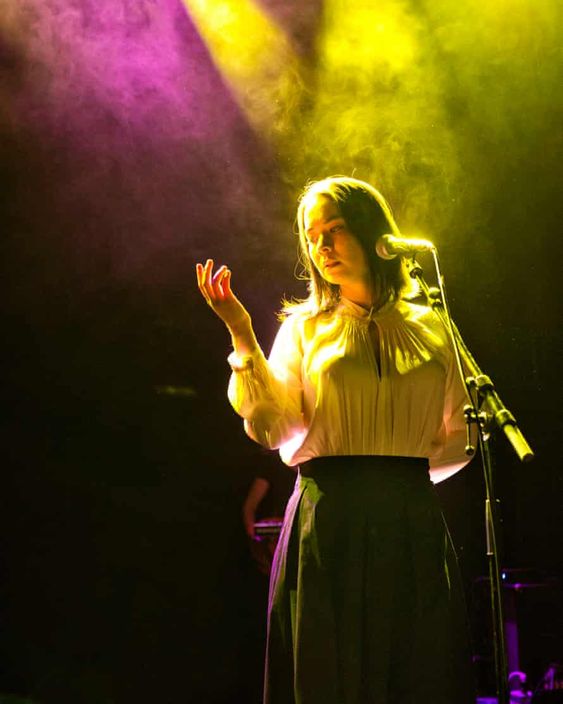 Looking for your next hook of melancholic music? Then Mitski Miyawaki is the perfect singer/ songwriter for you. Mitski is a unique indie rock artist whose songs deal with the struggles we face as humans. Her songs mainly focus on seeking a sense of identity. Through her lyrics, she seeks a place where she belongs. She longs for successful adult life and the arms of her estranged lover with equal passion. Her music is catchy and the deeper meanings of her lyrics will touch your soul. Kleenex, please!

“Happy” is about the domestic lives of women and the mockery of the idea that a man leads to happiness. Mitski released this song in 2016 within her album “Puberty 2”. In “Happy”, she sings of a woman struggling with her current relationship. For example, the woman struggles with the expectations placed upon her in order to keep “happy” (or her man around). Ironically, she finds peace when she hears him leaving in the night. The song also has a jazzy saxophone riff that will have you dancing in no time. (ps. if jazz is more your speed, check out our article on female jazz artists.)

“Humpty” deals with the idea of picking up the pieces without thinking about the possible consequences. Mitski released this song in her alternative folk album “Retired from Sad, New Career in Business” in  2013. This song focuses on the bitterness of trying to fix things. In addition, this song has her repeated struggle with her immaturity. Moreover, this sense of childish ignorance is bolstered through references to Humpty Dumpty.

“First Love/ Late Spring” deals with the struggles of new love, growing up, and self-destructive behaviors. Mitski released this song in 2014 in her alternative album “Bury Me At Makeout Creek”. The song reflects on the bitterness of love; sometimes it’s not the classic empowering feeling. On the contrary, love leaves you vulnerable. The bitterness of the song is also accentuated through the regrets of rushing towards adulthood and neglecting to enjoy the ease of childhood.

“Your Best American Girl” delves into an identity crisis that later leads to a path of self-acceptance. Mitski uses this song to establish herself as an indie rock artist with its transition from mellow to a more steely rock instrumental. This song focuses on the stress of feeling foreign. Furthermore, she rather changes herself to become more palatable to those around her. Eventually, she learns to finds value in her true identity rather than what people perceive her as.

“Nobody” exemplifies the pressure of trying to keep people around through becoming their ideal. Mitski sings about the struggles of loneliness and her desperation to combat it. She goes for a change of pace with a more upbeat pop tune. However, this song still deals with macabre subject matter. Humans are social creatures. Our hunger for companionship is amplified with what surrounds us and the ideals we create. Consequently, she sees “one good movie kiss” as the cure for all her loneliness.

Music Alert! Here is one of my favorite songs by Mitski. The struggle is real. Press “Listen in Browser” to play immediately.

“Two Slow Dancers” deals with the struggles of age and the strain it can place on a relationship. Mitski paints fond memories of youth; dances in a school gym that smells of wood and rubber. The song has a notable sense of longing for the ease and simplicity that youth offered. In addition, the fear of change is also present within the song. More specifically, the effects placed on important interpersonal relationships through these changes.

Sadness is the spice of life that make the happy time all the better. Mitski allows you to reflect on deeper issues and experience a strange sense of comfort. Although she is renowned as a singer, she truly shines as a songwriter. It’s easy to lose the weight of the song with its alluring accompaniment. If you’ve been looking for complex music that lets you feel something, give these songs a listen!

One thought on “Mitski: In Need of a Good Cry?”

Looking for your next hook of melancholic music? Then Mitski Miyawaki is the perfect singer/ songwriter for you. Mitski is a unique indie rock artist whose songs deal with the struggles we face as humans. Her songs mainly focus on... END_OF_DOCUMENT_TOKEN_TO_BE_REPLACED

If you have a love for mysticism, you are probably familiar with tarot cards.  Many decks contain tarot card art that can be just as personal as the reading. Artistic styles range from classic to contemporary and the devil is... END_OF_DOCUMENT_TOKEN_TO_BE_REPLACED

If you’re looking for music that will speak to your soul, jazz is the right choice 365 days a year. Our favorite female jazz singers include legends from the 30s and 40s up to today’s French jazz-pop darlings. Start adding... END_OF_DOCUMENT_TOKEN_TO_BE_REPLACED